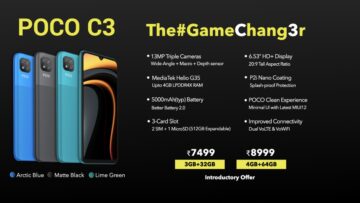 Xiaomi’s Poco has launched its entry-level device called the C3. This phone has launched with a 6.5-inch HD+ display with resolution of 720×1600 pixels. It runs on MIUI 12 version which is based on Android 10 operating system. The phone comes powered by octa-core MediaTek Helio G35 processor with 2GB and 3GB RAM with 32GB and 64GB internal storage which is further expandable. The phone packs triple rear cameras, which includes 13MP primary wide sensor, 5MP macro sensor and 2MP depth sensor. At the front, you get a 5MP camera for selfies. Poco C3 packs a 5,000mAh battery and supports 10W charging via microUSB 2.0 port.