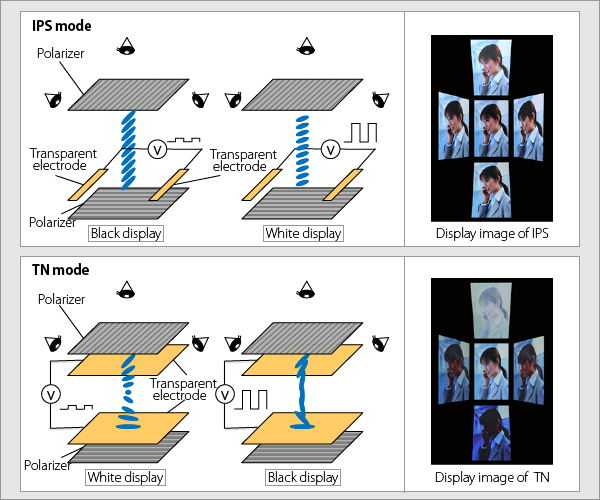 In Plane Switching(IPS) and Twisted Nematic(TN) is a kind of TFT LCDs(Thin Flim Transistor Liquid Crystal Displays). LCDs rely on the light modulating properties of energized liquid crystals and along with coordinated light filtering polarizers that are both behind and infront of the crystals to control what appears on the screen. By appling voltage to each crystal(or not), light is made to pass through the polarizers (or not). When these changed are made in microsecond intervals, you get smooth moving images.

TN and IPS displays differ in how their light-influening polaizer layers are aligned. When polarizers are aligned similarly, light can pass through, but when they are put in different orientations, light is blocked. And when you place liquid crystal molecules between the polarizer layers and apply voltage, The picture is produced.

IPS displays are popular for its eye catching color and wide viewing angles.IPS polarizers are aligned in parallel, which would normally allow all light to pass through. But again, the resting crystal molecules twist the light to disprut the normal flow. So IPS displays work in opposite to the TN displays. Rather than the application of voltage blocking light, the voltage lets light get through. it prevents the liquid crystals from twisting the light so it can pass through the parallel polarizers as usual.

Disadvantage of IPS over TN Display

The disadvantage of IPS monitors compared to TN ones is their relatively slower refresh rates and slower response times.

These delays are measured in milliseconds so majority of users will not be impacted. IPS is fast enough for streming movies, making video calls and so on.

TN polarizers are aligned perpendicular to each other. Without voltage, the liquid crystal molecules naturally “twist” the light so it can go from a vertically-aligned polarizer, be twisted in the crystals, and then pass through the associated horizontal polarizer. But if you apply voltage, the light no longer gets twisted and the perpendicular polarizer orientations block light from passing through.

If you want fast response time and high refresh rate with lower price go for TN display. On other hand, if you want better viewing angle and better color reproduction with little higher price go for IPS Display.