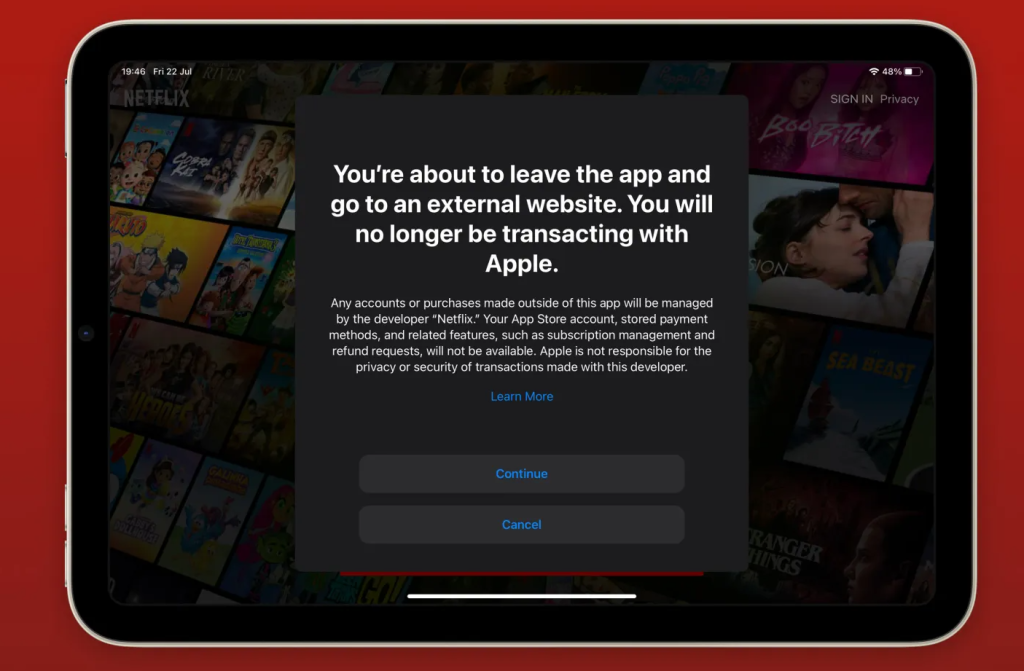 In order to allow customers to log in and pay for a subscription via external connections from sources other than the App Store, Apple started to enable “reader” apps early this year. When a user wants to sign up for a new membership, a function that directs users to the Netflix website is being added to the iOS version of the app.

The new iOS API for reading apps, which takes users to an external page before completing a subscription, is currently being used by the Netflix app, claims 9to5Mac. Although it’s unclear when exactly Netflix began granting iPhone and iPad customers access to this feature, the deployment is allegedly already global.

When you click the subscribe button, the message “you’re about to leave the app and go to an external website” appears. The app makes it clear that Apple is no longer in charge of the transaction and that all subscriptions should be managed on Netflix’s site.

After selecting Continue, you can enter your personal data, choose a payment method, and register for a Netflix plan on the Netflix website. This indicates that after the first year, Netflix is exempt from paying the recurring subscription cost of 15% levied for each subscription obtained through an iOS app.

This commission is lower than the typical 30% commission. It’s crucial to understand that Apple defines reading programmes as those that offer digital material as their major feature, such as periodicals, newspapers, books, radio, music, or videos.

Despite this move, Netflix has stopped offering in-app subscriptions for a long time. A 2018 update to the iOS app removed the capability of directly subscribing to Netflix through the company’s official iPhone and iPad apps. As expected, Apple attempted to prevent Netflix from requiring iOS customers to sign up for a Netflix plan using Safari.

Due to prior antitrust investigations, Apple has finally permitted a number of software categories to provide alternative subscription options outside the App Store without charging a fee to the company. Apple has lately been forced to allow App Store apps to accept third-party payment methods in a number of countries, including the Netherlands and South Korea.

Remember that Netflix lost around 1 million customers during the second quarter of 2022; an ad-supported plan is scheduled to debut in the early months of 2023